“Swedish Style: The Musical” is inspired by the captivating tale of the break-up of Swedish super group ABBA—a lesser-known but all-important chapter in the quartet’s fabled history. For a decade starting in 1972, ABBA released eight studio albums and a staggering 73 hit singles. In all, Benny, Björn, Frida and Agnetha have sold more than 370

“Swedish Style: The Musical” is inspired by the captivating tale of the break-up of Swedish super group ABBA—a lesser-known but all-important chapter in the quartet’s fabled history. For a decade starting in 1972, ABBA released eight studio albums and a staggering 73 hit singles. In all, Benny, Björn, Frida and Agnetha have sold more than 370 million albums around the world. But all good things come to an end, and ABBA’s demise was sullied with divorce between the two couples, internal strife and ultimately, dissolution. The dramatized theatrical rock musical “Swedish Style”—written by Turkish composer & producer and NYU Tisch School of the Arts Master’s grad Ayhan Sahin, with lyrics by Selcen Pamuk, equally accomplished as a university professor with a PhD and Master’s in Business—is rapt with love, loss, friendship, heartbreak and the penance of ultimate artistic immortality.

Read more…
0:00/???
No mention of timeless pop music would be complete without Swedish pop super group ABBA at the top of the list. For a decade starting in 1972, the quartet released eight studio albums and a staggering 73 hit singles. In all, Benny, Björn, Frida and Agnetha have sold more than 370 million albums around the world.

But all good things come to an end, and ABBA’s demise was sullied with divorce between the two couples, internal strife and ultimately, dissolution.

This is the story that inspired full-length rock musical “Swedish Style,” written by Turkish composer/producer and NYU Tisch School of the Arts Master’s grad Ayhan Sahin. Selcen Pamuk, equally accomplished as a university professor with a PhD and Master’s in Business, wrote lyrics. 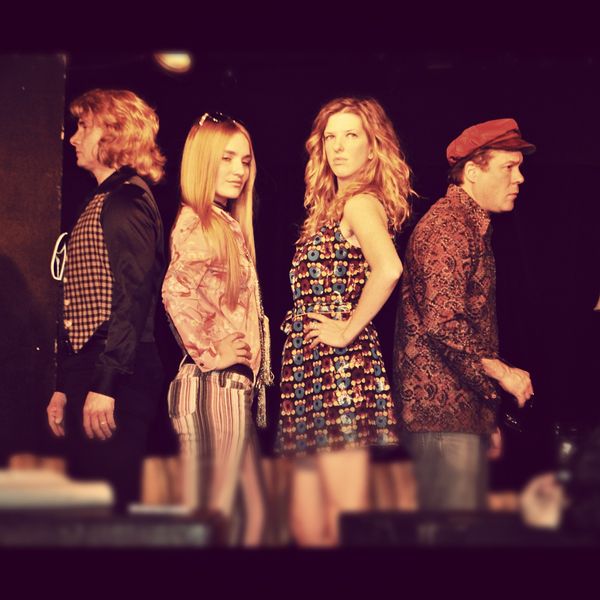 The dramatized theatrical production—set in the early 1980s and rapt with love, loss, friendship, heartbreak and the penance of ultimate artistic immortality—illustrates the saga of beloved pop group Opus 10’s demise, following the break-up of the quartet’s two couples. Manager Anna pleads with members Reno, Rita, Kurt and Katherine to deliver a final album that propels them beyond their “bubble gum” legacy and insures legendary status in the pop pantheon. Ultimately, the group’s primary nemesis turns out to be staring them in the mirror, as they strive to conjure their original magic one more time and achieve “immortality.” 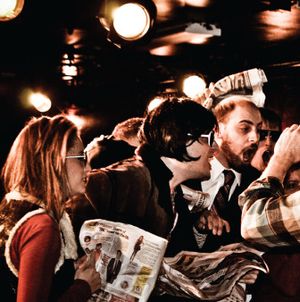 “Swedish Style” was originally staged in the mid-1990s at the Operetta House in Sahin’s native Ankara, Turkey, with subsequent performances in Copenhagen; Reykjavik, Iceland; and a symphonic version staged in Istanbul by the acclaimed Presidential Symphony Orchestra. In addition, “Swedish Style” was honored via an alliance of the Swedish-Turkish Cultural Cooperation during Stockholm 98’s Cultural City of Europe campaign. The ensemble featured a cast of 45 performers/musicians and 25 offstage contributors.

The success of “Swedish Style” also led to a personal invitation by the Swedish Ambassador in Turkey, then, Michael Sahlin for Sahin to fly to Sweden for a rendezvous with ABBA founders Benny Andersson and Björn Ulvaeus “to strengthen musical and cultural cooperation between Sweden and Turkey.” Within the past decade, the musical has also been showcased on VH1 in the U.S. and in a one-hour special on Turkish National Radio.

Now based in New York, Sahin has revised and refashioned “Swedish Style: The Musical” for licensing by commercial theatrical groups and schools. This 14-song cast soundtrack, released by Young Pals Music, comprises a full-cast vocal production, featuring five principal players and an eight-member ensemble mastered for use in licensed productions of the show. The 12-piece band offers a robust palette of keyboards and piano; electric, classical, flamenco and acoustic guitars; percussion, bass, violin, cello, flute and sax.

A video vignette was also filmed by Christopher Holmes/Holmeswood Features Entertainment in December 2011 that provides a compelling sketch of the new production and its soundtrack recording. The five-minute promotional trailer offers potential production companies a snapshot of the cast in action, detailing elements of the script, choreography, set and costumes.

Of course, the inspiration for “Swedish Style: The Musical” remains as vital today as it was 30 years ago. ABBA has indeed become immortal, thanks to the ongoing success of Broadway sensation “Mamma Mia!” and the accompanying 2008 film starring Meryl Streep, along with the group’s 2010 Rock and Roll Hall of Fame induction. 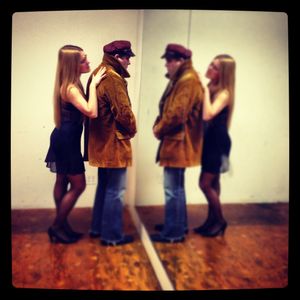 Now, adding to the legacy, “Swedish Style: The Musical” offers, for the first time, the captivating tale of a lesser-known—but all-important—chapter in the group’s fabled history. “It is through death a legend is born,” is a pivotal line in this new production. Through the theatrical dramatization, the legend lives on.

Chuck Taylor, January 2012
Chuck Taylor is an entertainment journalist who worked as an editor and writer for Billboard magazine in New York for 14 years.

1. Restringing The Guitar (Press, Anna, Fans)
Beloved and world-renowned pop quartet Opus 10 is making global headlines with rumors of a bitter breakup, following consecutive divorces by the act’s two couples, Reno and Rita, and Kurt and Katherine. Their manager Anna pleads with the group to remain intact, while assuring a fervent press corps that the group will be back. 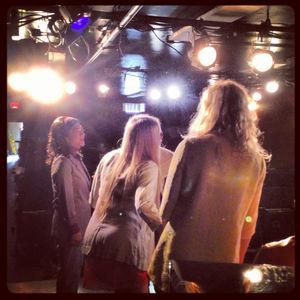 2. Bird With A Broken Wing (Anna)
One by one, the four members of Opus 10 gather in the garden of their isolated island cottage located on an island along the Stockholm Archipelago. Musical effects punctuate their entrances and growing agitation, as Anna tries to silence the quartet’s infighting and questions them about the rumored split. 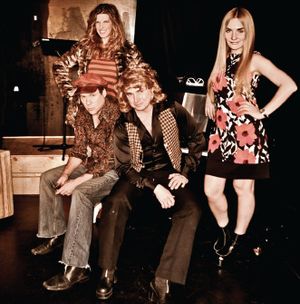 3. Chronological Survey (Rita)
In a private moment, group member Rita recalls her love affair with ex-husband Reno and acknowledges that she needs him more than she is willing to publicly admit.

4. Here We Go (Anna & The Group)
Anna warns the group members that if they surrender their ongoing success, Opus 10 will be little more than a pop culture memory within a year. To become “legends,” she persuades the members to record a final album together to prove their artistic merit.

5. Mr. And Mrs. Average Think (Full Company)
As preparation for a new album begins, designers, stylists, musicians and publicists are tripping over themselves to be involved one last time in the success of Opus 10, the world’s most popular super group.

6. Reincarnation (Reno, Anna, Kurt)
After a late recording session in the group’s control room, Reno, Kurt and Anna leave the studio and wander down a narrow Old Town street, dotted with cafes, bars and dimly lit street lamps. They are feeling content and sentimental; as they pass a poster promoting a past hit Opus 10 album, the three reflect on the good times with pride. 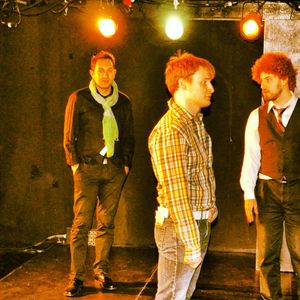 7. The Three Boys
In the midst of their sweet reflective moment, three young punks destroy the group’s poster by pasting an advert announcing a live show from a trendy new group directly over it. The boys poke fun at Opus 10’s past, wondering if they’re dead or alive, and belittling the titles of their pop songs.

8. Classics (Reno, Kurt)
Wounded, Reno and Kurt try to ignore the punks’ mockery. But Anna uses it as a tool to stress that if the group doesn’t release music that will stand the test of time—a classic—then the boys speak a painful truth. Reno and Kurt heed the warning and return to the studio to compose a new song “that will never die.” The two agree, “I want to sing for once a song that will live ever after/I want to leave the world a song that tastes like love and laughter.”

9. Hands Cold To My Touch (Reno)
As the sun rises, the new song is wrapped. Because of its vocal range, Rita is chosen to sing lead—and Katherine is not pleased. Out of revenge, she secretly leaks to a publicist that Rita has been drinking to excess following her divorce, which is impacting the recording of the new album. Cruel headlines hit the press, insinuating Rita’s downfall. Label honchos insist that Katherine take the lead, given the negative reports… Reno goes to Rita’s home to break the news to her. Standing in her lush, green garden, he reflects, “If she were crying her heart out I’d want to die/Knowing I could not comfort her.” 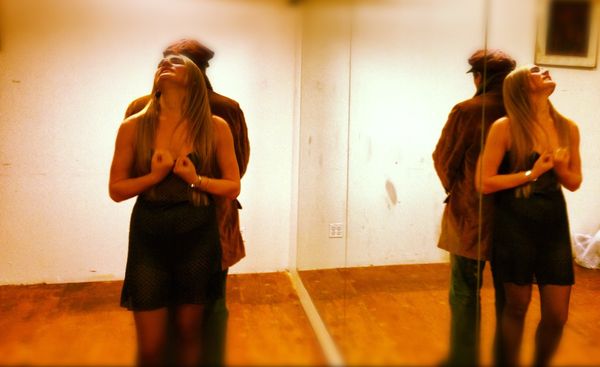 10. Rita’s Song (Rita)
As Reno is about to speak with Rita at her home, the couple’s past overpowers the moment and they fall into each other’s arms, ultimately spending the night together. In a solitary moment, she laments, “Tell my fable, silk and sable, silver roof and golden gable/A mighty lady, one man able, to bring her crashing down.”

11. Paparazzi Song (Press)
The next morning, Katherine leaves a message for Rita expressing faux sorrow over the label’s decision that Rita has lost the lead vocal. But Rita has the last laugh: At a meeting with the honchos, she offers to pay for Opus 10’s publicity, promotion and marketing in light of the group’s image woes—as long as they return the lead vocal to her… The album comes out two months later and while fans embrace it, critics massacre the effort. 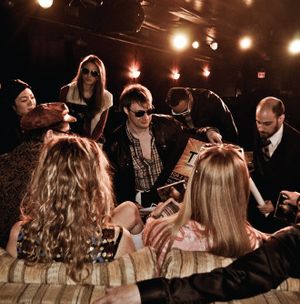 12. No Space For U-Turns (Rita)
All the money spent for publicity and marketing doesn’t save the album from ultimately failing to equal the Opus 10’s previous efforts. The label attempts to convince the group to contribute capital for a world tour. With Rita’s fortune spent, she declines… and to top the disillusionment, she discovers that it was Katherine who made up rumors of her drinking. She retreats to a Latin tavern to dance away her tears and fears and sings, “Life is a road, it is broad, but there is no space for U-turns.”

13. Immortal Tunes (Rita)
A wounded Rita decides to leave the group, believing the only way to truly find immortality is to leave Opus 10’s place in the pop pantheon to fate: She reasons, “It is through death a legend is born.”

14. Let The Music Speak To New Horizons (Anna And The Group)
Rita visits Anna at the group’s island hideaway and is surprised to find that Reno, Kurt and Katherine have all gathered to meet her. A fond farewell ensues, with hard feelings dissipating into the heavens… as the group’s ultimate legacy is left to the fates of the future.

Flamenco Guitar:
RAFAEL CINTRON
(on “No Space For U-Turns”)